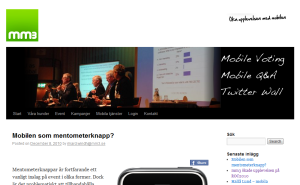 Anders was a co-founder and developed the initial base site, parts of the marketing engine (MEXc) and led the development of numerous other part services that were outsourced, as well as was responsible for the technical partnerships.

During 2015 we packaged CliqTags and MEXc into an offering for conference interaction called CloudConf.