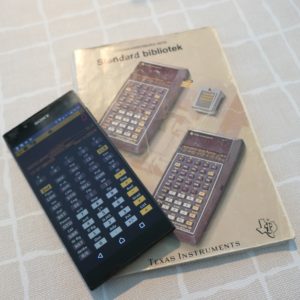 My first programmable calculator was Texas Instruments TI-58C (C as in constant/persistent memory for programs), and it was “Christmas” when I got it and for as long as I used it, until the keys broke.

Nowadays a smartphone is much more powerful than calculators (including when compared to modern calculators) so an app that does the same thing as the TI series calculators is performance-wise quite realistic, yet not necessarily trivial as a programming task.

The app includes most of the popular modules as well, so there’s plenty of pre-programmed functionality beyond what you get directly via the keypad.

Unfortunately, the only thing I have left of the original TI-58C is the manual for the Master Library module. But the app is a nice replacement for it in any case. They even kept the color scheme.